On April 4, 1970, Ms. Park Myung-ja (current President of GALLERY HYUNDAI) opened Hyundai Hwarang (Modern Art Gallery) on one side of the Insa-dong Intersection (30 Insadong-gil, Jongno-gu, Seoul). As one can tell from the name "Hyundai," the Gallery established itself as an organization presenting some of the latest, most contemporary trends in the art scene at the time, exhibited in the works of such artists as Do Sang-Bong, Nam Kwan, Yoon Jung-sik, and Chun Kyung-ja, in contrast to other Insa-dong-based galleries, which mainly exhibited and dealt in old, traditional paintings. Since its foundation, Hyundai Hwarang also has periodically exhibited the works of the late Park Soo Keun and Lee Jung Seop, both of whom have become renowned artists representing Korea. Considering that both artists were nameless at the time, Ms. Park Myung-ja and Hyundai Hwarang have been recognized for their great contribution to the Korean art scene. Their contribution received even greater appreciation following the efforts of the Gallery to organize numerous exhibitions of the works of the late Whanki Kim and Yoo Youngkuk, first-generation abstract painters who embroidered the history of Korean contemporary art, and to publish large-scale catalogs of their works, including English texts, thus opening up their worlds of art for international illumination.

In 1975 Hyundai Hwarang moved to a new location in Sagan-dong (8 Samcheong-ro, Jongno-gu, Seoul), adjacent to Gyeongbokgung Palace. Since then, the Gallery has maintained a close relationship with a group of artists that includes Yun Hyong-keun, Kim Tschang-Yeul, Park Seo-Bo, Chung Sang-hwa, and Lee Ufan, who participated in one of the most important trends in Korean contemporary art during the 70s, known as "Danseakhwa (Korean monochrome painting),"

organizing exhibitions and publishing catalogs of their works, and thereby greatly contributing to a better understanding of abstract art on the Korean art scene. This was the result of the friendship and faith between the artists and Ms. Park on the one hand, but also owing to Ms. Park's discerning eye and strong will for the growth and expansion of Korean art in the world. The fact that Korean works in the Danseakhwa style and their creators occupy a high position as subjects of most passionate enthusiasm on the international art scene, demonstrates the profound significance of the roles of Hyundai Hwarang and its founder, who has supported the artists’ work since their early years.

The scope of Hyundai Hwarang has not been limited to Korea, as it also has exhibited the works of international masters such as Joan Miró, Marc Chagall, and Henri Moore. By participating in the Art Chicago, 1987, which was one of the top three art fairs in the world, Hyundai Hwarang finally began to join the pace of the international art scene. This was the first time for a Korean art gallery to participate in an art fair overseas, and to gain a foothold from which to continuously and actively introduce Korean artists and works to the mainstream international art scene. In the same year, Hyundai Hwarang changed its name to "GALLERY HYUNDAI.“

In 1990 a special performance took place in the yard outside GALLERY HYUNDAI. Nam June Paik, the inventor of video art, did a shamanic performance (gut) titled A Pas de Loup: From Seoul to Budapest, in memory of his lifetime friend Joseph Beuys. Nam June Paik, who had gained worldwide fame while working in Germany and the United States, chose GALLERY HYUNDAI as a base for activity in his home country Korea, which was also on account of his particular friendship with Ms. Park Myung-ja.

In 1995 GALLERY HYUNDAI opened a new exhibition space (14 Samcheong-ro, Jongno-gu, Seoul). Large-scale exhibitions could be accommodated in three stories of the building, and the Window Gallery facing the street would be operated for talented emerging artists, thus enabling the Gallery to present a broad spectrum of exhibitions. GALLERY HYUNDAI began to participate in FIAC (Paris) from 1995, and in Art Basel (Basel) from 1996. Now taking part in top world art fairs, GALLERY HYUNDAI could lead endeavors to promote Korean artists overseas, and introduce trends of the international art scene to Korea with better accuracy and speed.

In 2002 GALLERY HYUNDAI established DoArt (2002-2007) as a new space for young artists. The founder and director of DoArt was Do Hyung-teh, who had inherited the discerning eye and temperament of his mother, Ms. Park Myung-ja. DoArt continued to organize novel exhibitions, which had not been attempted by GALLERY HYUNDAI or other existing galleries in Korea, creating new trends on the Korean art scene. Numerous young artists such as CHOE U-Ram (opening exhibition), Lee Yoon-jean, Park Min Joon, and Seok ho Kang made their debut on the art scene through their shows at DoArt. First initiated in Insadong, DoArt expanded its territory to DoArt Beijing (2007-2008) and DoArt Seoul (2008-2010), organizing exhibitions of global contemporary artists including Olivier Mosset, Douglas Gordon, On Kawara, Young-Hae Chang Heavy Industries, and many others.

In 2008 GALLERY HYUNDAI Gangnam (2008-2012), equipped with the largest single exhibition space in Korea, was opened, and in 2010, 16 Bungee was founded as a space for experimental artists, who were to lead contemporary art. Hence, GALLERY HYUNDAI had established itself as Korea's top gallery, endlessly presenting high-quality exhibitions of Korean and international contemporary artists in both the Gangbuk and Gangnam areas in Seoul. Consequently, in 2010 Ms. Park Myung-ja was selected as the most influential person on the Korean art scene.

The history of GALLERY HYUNDAI has been almost half a century of leadership at the forefront of the Korean art scene, particularly contemporary art, and is the result of the devoted efforts and volition of Ms. Park Myung-ja. Today's GALLERY HYUNDAI (CEO Do Hyung-teh) has soundly succeeded to this heritage, and is vigorously working together with the most outstanding artists in Korea and overseas to fulfill its role and responsibility as one of the leading art galleries in Korea as well as on the international art scene. GALLERY HYUNDAI will continue to present artists' works and exhibitions of the highest quality based on its discerning eye, transcending all borders and boundaries.

1 As all the galleries established before 1970, when Hyundai Hwarang was founded, are closed today, GALLERY HYUNDAI (its name was changed from "Hyundai Hwarang" to "GALLERY HYUNDAI" in 1987) is currently the oldest gallery in Korea. Furthermore, at the time, most institutions with the name "gallery (hwarang)" not only had the objective of exhibiting works and lending space, but also were operated through people's support and patronage. The objectives and management methods of today's galleries in general, e.g. organizing exhibitions to promote artists and their works, and pursuing commercial profit through mediating transactions between artists and collectors, were introduced for the first time by Ms. Park Myung-ja in Hyundai Hwarang. Based on such facts, Hyundai Hwarang is considered by many to be the first gallery in Korea.

2 The name of the gallery, "Hyundai," is a noun meaning "the latest," "now" or “new” and used to refer to modern and contemporary in Korean. This reflected the atmosphere of the time, which demanded modernization through distinction from the past or things of the old era. Thus, the early English description of Hyundai Hwarang was "Modern Art Gallery," using the word "modern" to represent the atmosphere of "latest" or "modernization" in Korea at the time. 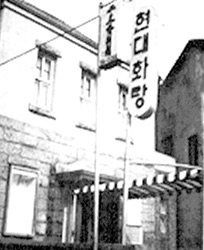 Modern Art Gallery (Hyundai Hwarang)
opened on one side of the Insa-dong, 1970 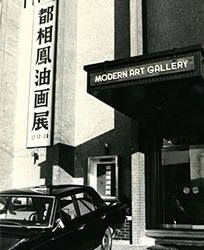 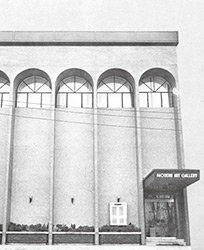 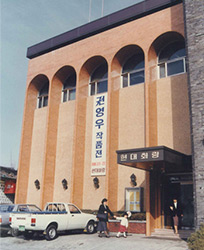 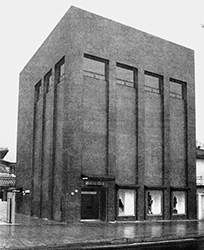